Sponsorship for the FIFA World Cup is a fundamental part of what makes the iconic sporting competition possible.

But it’s perhaps never been as important for governing body FIFA itself as it is in 2018.

FIFA post big losses most years – £275m in 2016, and £140m in 2017. However, these vast sums are offset by World Cup-year revenues, healthily boosted in no small part by tournament sponsors.

So how has it been looking for them in this World Cup year? It’s not been entirely smooth sailing. Russia’s hosting of the 2018 FIFA World Cup has been fraught with the odd spot of controversy since it was awarded FIFA’s jewel in the crown back in December 2010.

Inevitably, this has kept some potential sponsors away. Overall, there are five official tournament sponsors listed for 2018, which is down on the number from the previous two World Cups (eight in 2014 and six in 2010).

Coupled with FIFA’s seven long-term partners, it means there are 12 notable key sponsors altogether – which, fittingly, is the perfect amount for a starting XI and manager. This got us thinking: which companies could we put where and why into a starting line-up of sponsors? We put together our very own Slingshot Sponsorship World Cup XI below in a 4-4-2 formation.

Take a look, and then scroll down to find out precisely why each brand is playing where it is… 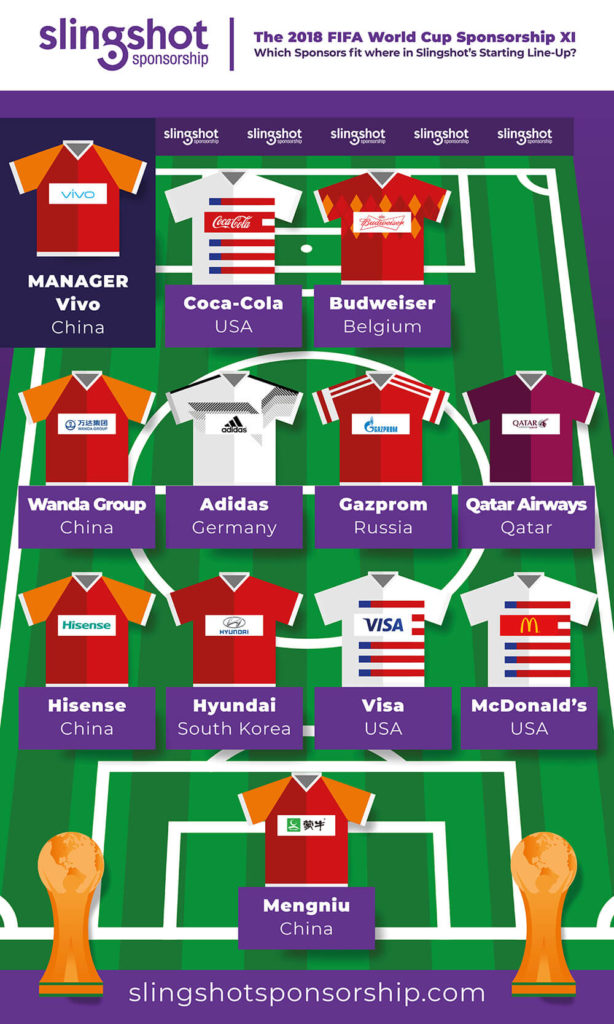 There’s a lot of competition out there when you’re facing the best teams in the world, so you need a top goalkeeper to stand any chance. Fortunately, we have exactly that in the shape of China’s market-leading dairy produce company – a giant in their field who provide a very strong base in the spine of the team and give a boost to the bones of the squad around them.

Whether it’s attacking or defending required from the right full-back position, there are plenty of options available on McDonald’s menu. When things are tight and the team require a bit of game management, they’ll have no problem making a meal of any challenges – but with so much to offer the team, they should be able to serve up a good shift.

The financial services company are fully invested in the team and, despite their longevity, aren’t anywhere near spent yet. That makes them the perfect candidates to sit in the heart of the defence, swiping through strikers at will – although they are at risk of getting carded.

Pacey defenders are a must in modern football, and Hyundai know exactly how to put their foot on the gas when they need to. At the same time they’re a solid proposition who put the brakes on any dangerous attacks they face. As an added bonus, they’re not liable to break down with injury at any moment.

Hisense have a lot to offer in this position, whether it’s crisp, clear vision when going forward or simply keeping cool when under pressure. What’s more, the Chinese white goods company is built like a fridge, making them an intimidating proposition for any opponent.

With the ability to fly down the wing and being economical in possession, Qatar Airways slot straight into the right midfield position. Preparation is key for them, with the right pre-match fuel required to perform – but when they get going, they can cover the entire field and are able to float in perfect crosses to the target men.

Bringing the energy into the midfield, Gazprom are ideal to have in the middle of the park thanks to their ability to clean up loose possession and naturally bring others in to play. They sometimes have a tendency to gas a bit too much to the referee, but overall they’re the oil which keeps the engine room of this Sponsorship XI ticking over.

A stylish option to complement Gazprom’s energy, Adidas know exactly what they need to do to look good on the pitch. With top footwork and an intense training work ethic, they can draw upon a wealth of experience from top athletes across all sports, which allows them to perform with maximum impact.

The Chinese property developers and cinema chain owners are right at home on the left-hand side, with proven ability to break down the opposition and help build on possession. They’re definitely one to keep an eye on, as anything could play out with them involved during the 90 minutes before they head back to the luxury team hotel.

Yes, they may be somewhat overconfident on occasion, but Budweiser has the ability to settle the team’s nerves when leading the line upfront. Just be warned if the game goes to a penalty shootout, however: they could struggle to keep their legs composed during the run-up, resulting in bottling their effort altogether.

Coca-Cola provide a refreshing look to the front line, making them the perfect strike partner in a fluid front two. Their presence gives those around them a much-needed boost, and they provide an exciting fizz in attack, although that can wear off after a short while making their performance fall flat.

Some say this is a shrewd appointment from the board, and the fantastic reception Vivo have got from people phoning in to talk shows speaks volumes. But the proof is in the pudding and fans will be hoping Vivo’s new-age thinking and innovation on the field won’t be too much to take in for the squad.

Interested in learning more about how to get the most success in sponsorship? Follow our social media accounts for regular updates: