Formula 1 Sponsorship is Moving Up a Gear – but who makes Slingshot’s Sponsors’ Podium?

With its heady mix of speed, excitement, danger and competition set amongst the backdrop of a luxurious, globetrotting lifestyle, you’ll struggle to find a more glamorous sport than Formula 1.

So it’s easy to understand why the incredibly popular jewel in motorsport’s crown attracts some of the biggest sponsorship deals on the planet. There are plenty of household names and premium brands who seek to get in on the action and benefit from the powerful connotations that even just the Formula 1 name itself brings.

But as we have highlighted before, sponsorship partnerships are moving away from simple logo adornments as rapidly as Lewis Hamilton off a grand prix starting grid. The key is now brand activations and shared benefits – and sponsorship in F1 is no exception to this trend.

How Formula 1 sponsorship is changing

A quick-as-lightning example of this would be BT’s partnership with the Williams team, which started up back in 2015. Their deal went miles beyond a mere association in name, extending to BT providing extensive technological expertise and an overhauling of their systems with the aim of cutting down Williams’ race times. Those crucial split-seconds are what really gets team bosses’ engines revving.

Three years on and now under the stewardship of Formula 1’s new audience-driven owners Liberty Media – who also count Live Nation among their portfolio – this sponsorship trend continues apace.

The launch of Formula 1’s first “fan festival” occurred just three weeks into the 2018 season in Shanghai, which was a full-throttle experiential activation ahead of the Chinese Grand Prix. That event was driven by a Heineken-branded stage boasting star DJs, as well as opportunities for other key global partners such as Emirates, Pirelli and Petronas to stretch their appeal to new audiences.

“The days of sticker and cash are gone,” says McLaren spokesman Tim Bampton, referring to the passive sponsorship of the past where companies simply stuck their logos on the race cars. “The demands of new sponsors have changed substantially.” And he’s not wrong.

But which brands are really driving Formula 1’s sponsorship game forward? To help us decide, we’ve put together Slingshot’s very own F1 sponsorship podium finish. It was neck-and-neck until the last corner, but here’s how they came over the line… 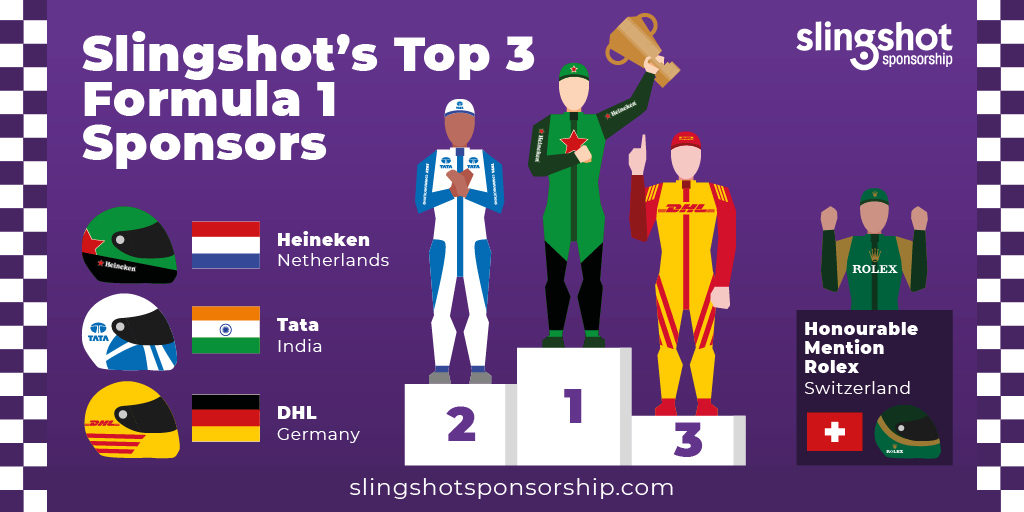 Formula 1 cars are all about speed and efficiency – just like DHL’s link-up with the world’s foremost motorsport. With over 35 years’ experience in motorsport logistics, vital in a global sport, DHL proudly label themselves as the unsung heroes who (in some cases literally) steer the ship and make things possible behind the va-va-vooms.

DHL’s Formula 1 Brand Activation
Not content with just enabling races to go ahead with the delivery of team assets, DHL launched two awards championing speed in both the F1 drivers themselves and their supporting teams: the DHL Fastest Lap and DHL Fastest Pit Stop Award. Furthermore, DHL are the title sponsor of Formula 1’s pioneering eSports competition, a tangible result of a brand working hard to innovate in sponsorship before they’re lapped by the competition.

Indian firm Tata Communications couldn’t keep pace with Heineken in the finishing stretch, but come a close second. Their efforts are heavily based around technological innovation within Formula 1, playing a critical role in enabling Liberty Media to step things up a gear with showcasing their new vision of the sport to its fans.

Tata Communications’ Formula 1 Brand Activation
During the 2017 Singapore Grand Prix, Tata Communications conducted a test of truly live 360º video on the track, which enabled fans across the globe to experience the pulsating action in and around the circuit as if they were there in person. If that wouldn’t get fans’ engines started, we don’t know what would.

Thanks to their refuelled efforts in Formula 1, Heineken have the pleasure of enjoying a victory lap around Slingshot’s track before spraying a bottle of their finest over their competitors.

The fan festival is just one example of how Formula 1 have provided Heineken with unique opportunities to engage with existing and potential consumers. This has helped rev up important growth areas such as commercial opportunities, responsible drinking awareness and skill transfers between F1 and their employees, leading to a boost of £12.6m in sponsorship revenue.

Take a look at a couple of their recent campaigns:

“When You Drive, Never Drink” campaign

Heineken – When You Drive, Never Drink. from Sizzer Amsterdam on Vimeo.

“More Than a Race” campaign

Heineken, Formula 1 is More Than a Race. from Mathieu Caudroy on Vimeo.

Plus an honourable mention for Rolex
Country: Switzerland

Despite missing out on the Slingshot podium by a few hundredths of a second, we must also give an honourable mention to the Official Timepiece of Formula 1.

The 2018 season marked the sixth consecutive year Rolex were the title sponsors of the opening race, and in a timely reminder top their ties to the history of the sport, they were also the main sponsors of the British Grand Prix.

Rolex’s Formula 1 Brand Activation
With a nod to the importance of clockwatching in Formula 1, Rolex are also the Pit Lane Clock sponsors – a visual reminder of precision timing in F1. Recently, Rolex have also begun signing up some of the sport’s former greats such as Sir Jackie Stewart, Mark Webber and Nico Rosberg as “motorsport testimonees” to further extend their brand appeal to various audiences.

So watch this space – there’s a lot more to come from all of F1’s starting grid of sponsors under the demanding gaze of its audience-facing owners. And we can’t wait to see what that brings.

Interested in learning more about how to get the most success in sponsorship? Follow our social media accounts for regular updates:

Sport is the best known platform for sponsorship,

and sadly often the least inventive –money exchanged for logo awareness on kits, stadia and perimeter boards. However, the recent £150 million sponsorship deal between Emirates and Arsenal F.C. is a great example of a shift from traditional sponsorship to a relationship where shared resources drive mutual benefits – what all sponsorship should be aiming for. Is this creation of a genuine partnership a one-off or might we be seeing a wider move in this direction across sport?

Arsenal’s agreement to share its advanced CRM system with the Dubai based airline was integral to the sponsorship deal going ahead. Head of Communications at Emirates Boutros Boutros outlined the importance of this saying:

‘Data on customers is important to us… detailed data on customers allows us to work out where we spend our ad budgets and who we target as well as what markets we focus on.’

While Emirates did purchase kit and stadium rights the CRM data deal constructed a two way channel of exchange that benefits both parties. This new approach to sponsorship is by no means exclusive to Arsenal; other Premier League clubs have also moved towards this model .

Since its takeover by the Abu Dhabi United

Group Manchester City has led the football world in creating meaningful partnerships through sponsorship – the creation of a Head of Partnerships role at the club in 2009 signalling this. Luis Vicente – the man holding this role – outlines the clubs belief:

‘(…)for us it is not about where you place the logo of your partner. It is not about the size of the financial commitment with us. It is about how we can find a fit.’

A great example of the club finding a fit is its partnership with EA sports, a relationship so integrated the gaming company employs two people solely to produce content for the club. The partnership has led to permanent gaming installations put inside the Etihad for fans, the team’s kit being launched virtually by EA and exclusive and in depth club content for City fans. In the last few days the club has extended this through the creation of branded corporate boxes and non-matchday events.

It is not just football within the world of sport that has moved in this way. The deal struck between Infiniti cars and the leading F1 team Red Bull Racing mentioned by Ben Fuchs is another example. As part of the deal Infiniti are assisting the F1 team in the development of its Kinetic Energy Recovery System (KERS), along with the team using Infiniti’s Scratch Heal paint for aerodynamic purposes. In return Red Bull is helping Infiniti in the creation of a new High Performance road car to follow the Infiniti FX Sebastian Vettel. Chelsea FC’s unconventional partnership with the F1 team Sauber is another example. While output has been minimal so far the two are promising to embark on the next stage of their partnership very soon.

As the value of sponsorship deals continues to grow within sport the expectation from brands will only increase that sponsorship partnerships will become exactly that, partnerships. Luis Vicente highlights this as something that sport should embrace, saying:

‘Sponsorship in its traditional form is dead. You have to come up with something that is an embedded, engaging experience with your partners.’

This desire to create an engaging experience through a genuine partnership is a model that is becoming increasingly popular, suggesting sport as a platform for sponsorship is finally coming of age.