According to a recent poll, 82% of Londoners support an increase in sponsorship across the public transport sector – this statistic seems even more surprising when you realise that the poll included the acquisition of naming rights for tube stations. Public support aside, it seems that brands are taking to the idea. Samsung recently trialled a month-long partnership with Madrid’s ‘Puerta del Sol’ Metro Station (more info) – a partnership which was then acquired by Vodafone to become ‘Vodafone Sol’ after the telecoms giant purchased the naming rights for a reported 1 million Euro a year deal, to the dismay of many Madrilenians. 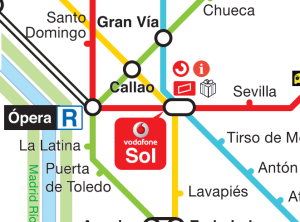 There’s no doubt that this sponsorship has been effective in generating an additional revenue stream, one that has been crucial for the cash-strapped Spanish transport authority. A similar approach in London would almost single-handedly allow the cap on fare increase which we, the general public, so desperately crave. Yet despite the benefit for the general public, it is sometimes hard to find the true value for sponsors in the public transport industry. To demonstrate this, one need look no further than London Transport’s other high profile sponsorship deal, The Emirates Air Line. 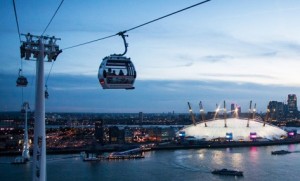 The project was originally billed as an entirely self-financing transport link for commuters and tourists alike costing £25 m; but by the time of completion this had risen dramatically to £63 m.

Whilst Boris Johnson’s enthusiasm for one of his signature projects continues, it would be surprising to hear such continued positivity from Emirates. If recent usage figures are anything to go by, it is difficult to see where Emirates can draw any positives from their association. Statistics show that the transport link is running at an average capacity of around 1 %. Despite this monumental drop, during 2012 the Emirates Air Line was one of London’s premier tourist attractions and generated a vast amount of exposure for the company. Short-term successes aside, surely when Emirates put pen to paper on the 10 year deal, they were hoping for more long-term rewards rather than the ‘flash in the pan’ success they received.

So as a sponsorship campaign, what does the future hold for The Emirates Air Line and is there any danger of Emirates ‘doing a Barclays?’ If Boris thought Emirates got him out of a hole with the shortfall, then in more recent times they have landed him in another one, with the much-publicised controversial contractual details that was implemented by the UAE. The contract appeared to exclude Israel from business with TFL. In some peoples’ eyes, what was once a popular tourist attraction has now become a symbol of hatred towards Israel.

Industry trends suggest that creative and selective campaigns often out-trump heavy-handed broadcast branding. This is not to say, however, that every project of this scale in the public transport industry is doomed for failure, it just suggests that the industry needs to develop. If the industry can learn anything from the Emirates/TFL partnership it is that brands contemplating putting their name on a public transport project should be aware of the challenges ahead. Perhaps brands would be better off targeting tried and tested transport models on a smaller-scale with an increased emphasis on engagement.


Connecting with the Youth- Successful Sponsorship Strategies to Young People

Digital media proliferation has led to social media platforms becoming paramount to successful sponsorship strategies directed at the youth. Younger consumers also tend to be far more receptive to campaigns based around their passions, of which sport and music are the most universal.

Sponsorship campaigns in Universities are becoming increasingly common, with the most well-known examples coming through sport. Deloitte’s collaboration with the British Universities and Colleges Sport body (BUCS) is particularly successful. The 5-year partnership deal focuses on a ‘Leadership Academy’ model which delivers events to BUCS members to experience and develop leadership and communication skills.

Through the partnership, Deloitte has first-hand access to thousands of graduates which enables them to maintain their position as one of the top graduate employers (#2 in The Times Top 100 Graduate Employers 2013). It also gives Deloitte an opportunity to build a rapport with students, making them a leading choice for career-searching graduates.

Spotify and Bacardi on Tour

Consumers tend to be more receptive to campaigns that draw upon personal interests. ‘Spotify on Tour’ tapped into this by teaming up with Bacardi to bring music based experiences to fans across America. They created intimate gigs and festivals with renowned artists such as Ed Sheeran and Kendrick Lemar with an emphasis on musical discovery for real music lovers.

The project was supported by a dedicated ‘Spotify on Tour’ which enabled sharing of tour dates, exclusive images and video content. The campaign resonated with the younger generation, which in turn helped Spotify increase its Facebook ‘likes’ to over 2.7 million.

Coca-Cola – Fusion of Music and Sport

Sporting events also represent golden opportunities to engage with young people. Coca-Cola directed its sponsorship of London 2012 towards the youth with the innovative ‘Move to the Beat’ campaign. ‘Move to the Beat’ celebrated British talent by combining the critically acclaimed architects Pernilla & Asif and award winning DJ Mark Ronson. It was based over four different platforms: the Coca-Cola song, documentary, Facebook app and the Coca-Cola Olympic Games pavilion, and had the overall objective of bringing ‘teens closer to the Olympic Games by fusing sport with their passion for music’. The campaign generated a vast amount of online activity including 245 million search impressions, an additional 1.5 million Facebook likes and 21,000 Twitter followers. In addition, Coke became the 2nd most talked about brand during the London Olympics.

Much of the success of these campaigns can be attributed to the use of highly  relevant content for young people and the right platform for the market. Given the significant changes to the way young people are now marketed to it will be fascinating to see how the sponsorship landscape continues to evolve and how brands adapt to this fertile marketing demographic.